Prof. Annemieke Aartsma-Rus is taking on a challenge by reading and commenting on a paper a day. She shares her insights, findings and thoughts via her @oligogirl Twitter account. See below the overview of March 2022.

The injected cells are cardiosphere-derived cells (CDCs). These cells excrete factors that improve regeneration, reduce fibrosis and change the immune response from a negative to a more benign response. CDCs do not have eternal life: treatment is needed every 3 months.

Studies in mdx mice showed improved function & survival (beyond 2 years – very long term preclinical study!) In a previous trial CDCs were injected into the coronary artery of the heart as a single treatment, which was safe and well tolerated. Here intravenous injection was used.

The trial was a double blind placebo controlled trial in 20 Duchenne patients, 12 in the placebo group and 8 in the treated group. Patients were treated every 3 months. One patient in the CDC treatment group dropped out due to a hypersensitivity reaction after the first infusion. 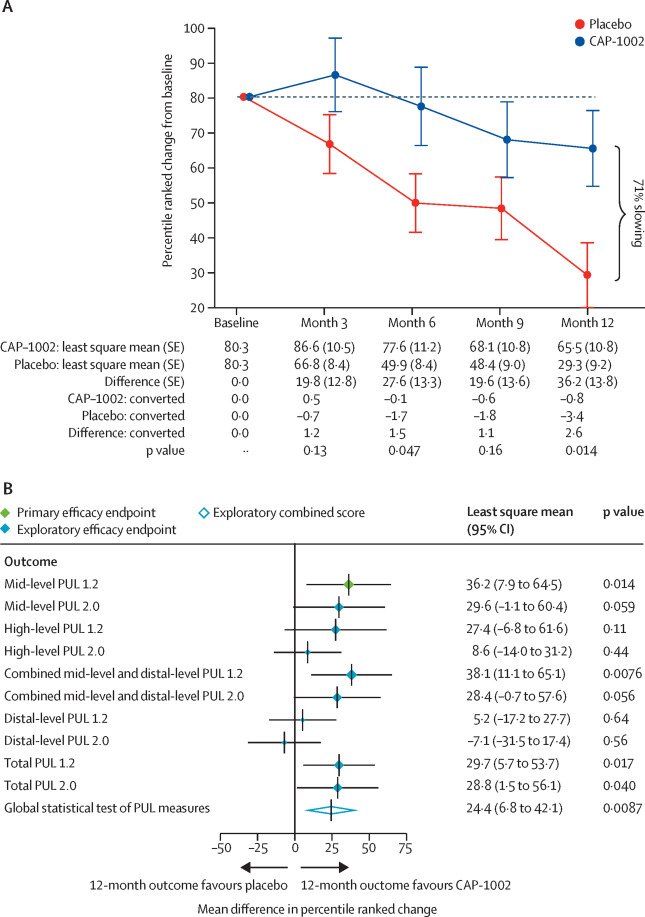 Heart function was monitored as well. Treated patients had a stable ejection fraction, while there was a decrease in the placebo group. No effect was seen on pulmonary function. However, there is little decline in respiratory function so it is difficult to measure a slower decline.

Authors discuss that this is the first clinical trial showing treatment effects on the PUL. As the PUL was developed with Duchenne patients focusing on what they found important, these treatment effects likely reflect clinical benefit and a slower loss of independence of patients

Authors also discuss that the intravenous treatment appears to work and is of course much easier than the intracoronary treatment used earlier. Currently an open label extension study is ongoing and a phase 3 placebo controlled trial is planned.

Authors discuss the limitations of the trial, i.e. a small group was treated so far and only for 12 months. So more work is needed. Looking forward to the phase 3 trial results. While phase 2 data are encouraging, more work is needed to confirm safety and efficacy.

I commend the authors and Capricor for the work and focusing on the upper limb function and patients who are (almost) non ambulatory.