Today’s pick is a personal view from The Lancet Respiratory Medicine by Birnkrant et al on cardiorespiratory management of Duchenne in light of genetics and newly developed therapies. Doi 10.1016/s2213-2600(21)00581-6

Due to improved standards of care for Duchenne, including respiratory support and assisted ventilation, most Duchenne patients currently die due to cardiac failure. As such, authors stress that there should be a focus on cardiac management and therapy.

The view gives a very nice and comprehensive overview of different therapeutic approaches in development, e.g. vamorolone (steroid alternative with less side effects), edasalonexent (anti-inflammatory compounds that did not show efficacy in phase 3 trials),

Aldosteron (compound that was cardioprotective in mdx mice), idebenone (compound acting on mitochondria, did not show efficacy in phase 3 trials), givinostat & CAP-1002 (both compounds with preliminary positive results in phase 2 trials, now tested in placebo-controlled trials).

A delay in ejection fraction <50% is suggested by the data, but based on small numbers so far. For exon skipping data from approved eteplirsen and golodirsen suggest delayed reduction in forced vital capacity compared to natural history though for golodirsen numbers are small.

No information is yet available on the effect on the heart. For micro-dystrophin data in mdx mice suggest an effect on heart & skeletal muscle. In patients treated with AAV micro-dystrophin it is not yet known whether they result in functional effects, including on respiration and heart.

Genome editing is still in the preclinical phase, and authors stress challenges such as off target editing (irreversible) and cas9 immunity (present in >80% of adults).

They stress that more natural history data on cardiac and respiratory function in Duchenne is needed. I agree. As there long has been a focus on trials in ambulant patients, natural history has been collected in this group. However, the cardiorespiratory declines starts later.

Authors indicate that with limited natural history data collected so far for this, it is already known that there is a lot of variability in both respiratory and heart function in Duchenne patients. This seems to not depend on the mutation in the dystrophin gene.

Heart function correlates best with survival in Duchenne patients, where long survivors generally have exceptionally good heart function. This underlines that focusing on heart function in therapeutic evaluations is probably a good idea.

The challenges of measuring cardiac function effects during interventional is that often trials are done in young patients, before the onset of severe heart problems, the short duration of trials (likely >2 years is needed to measure a slower development of heart problems).

Furthermore, natural history is limited, but we already know there is variability between patients. Authors suggest collecting natural history data for cardiac outcomes with standardized methods (which is currently not done).

Given the slow development of heart failure, they also stress that surrogate endpoints would be needed in order to predict progression and therapeutic effects earlier. For now these are lacking – also due to limited standardization in cardiac function methods.

For the mentioned variability, genetic modifiers may underlie differences. This can be due to mutations in the dystrophin gene, where those allowing production of low levels of dystrophin (e.g. exon 44 skippable mutations) have a slower development of respiratory & heart failure.

Some of these genes may also influence the development of cardiac pathology. There are probably also many undiscovered genetic modifiers for both skeletal and/or heart pathology. Again natural history studies (with standardized protocols) are crucial to identify them.

Authors end with a personal challenge of clinicians managing Duchenne patients care with the ‘narrative that a DMD cure is imminent’. Authors indicate this sometimes makes it difficult for clinicians and patients to decide to go for aggressive interventions or palliative care.

The aggressive interventions often involved technically complex approaches, which might be difficult to implement for Duchenne patients, who are fragile and some of whom have cognitive difficulties and behavioral problems. This also makes informed shared decision making difficult.

I like that the authors end with this patient centered challenge. However, I want to stress that the narrative of ‘a cure is imminent’ is incorrect (I wish I could say something else but I cannot). TREATMENTS might be imminent – and some are approved even.

However, treatments currently approved and in development will slow down disease progression and will not undo damage that has accumulated or restore function that has been lost. As such, for older patients with more advanced disease, treatment effects will be relatively limited.

Note that I do not say these patients should not be treated. The less function you have left, the more important that function becomes. However, a cure to me implies accumulated damage is undone, and this is currently not feasible.

All in all a very informative read. I like the focus on cardiac and respiratory function. I like that the authors made it patient centric and informative (quick update on therapies in development). Do not like the cure part, I do like that the authors end with that currently we should focus on care for respiratory and cardiac management as that is what we have and things are already much better than they were decades ago due to this care. Recommended reading, just read treatment where authors say care. 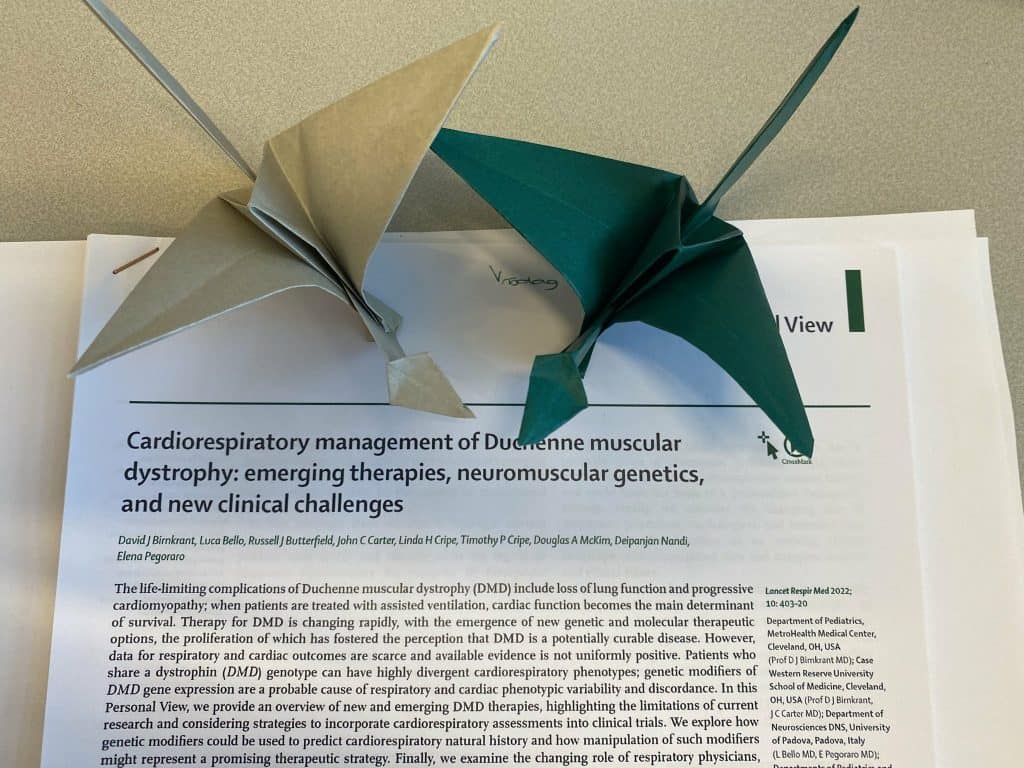