Age at Diagnosis for Duchenne Muscular Dystrophy: Why we must do better

Prof. Annemieke Aartsma-Rus is taking on a challenge by reading and commenting on a paper a day. She shares her insights, findings and thoughts via her @oligogirl Twitter account. See below the overview of May 2022.

Today’s pick is a preprint of a commentary from @MuscleNerve by Ros Quinlivan on the age of diagnosis of Duchenne patients and why we should do better. This is a topic close to my heart so I prioritized reading it post holiday doi 10.1002/mus.27574
The commentary is about a paper by Thomas et al who performed a retrospective analysis on the age of diagnosis in patients in US Duchenne reference centers: https://pubmed.ncbi.nlm.nih.gov/35312090/ Sadly this revealed there is no improvement in
the past 30 (!) years 🙁
From 2000-2015 the average age of diagnosis was 4.9 vs 5 from 1982-2000. The first signs of the conditions appeared at 2.7 years on average, but a serum creatine kinase analysis (amarker for muscle damage) was on average done at 4.6 years (2 years later!)
The delays were even more prominent in ethnic communities, suggesting a socio-economic impact. Duchenne is a disease that can currently only be managed – there is no cure. So why does it matter when patients are diagnosed?
First (not mentioned in the commentary) the end of a diagnostic odyssey for the family. Second (also not mentioned) it allows carrier analysis for the mother. Third (mentioned) while there is no cure for Duchenne, there is multidisciplinary care that can delay disease progression. Corticosteroids can delay loss of ambulation, development of respiratory insufficiency & heart problems. When steroids are started at age 2-4 they have most impact. Note that with an average diagnosis at age 4.9, some patients will be diagnosed significantly later. 4. There are treatments approved that restore dystrophin. Currently these only delay disease progression. However, earlier treatment means more delay so an earlier diagnosis is better. Also for potential treatments such as gene therapy earlier intervention would be better.
Not only for improved treatment effects, but also because gene therapy needs viral vectors, and there are less complications expected in younger patients – less chance of pre-existing immunity to the viral vector, & lower weight so less virus needed & less strong immune response.

The problem of delayed diagnosis is not new.@jwmdrc  published on this problem in 2014 and I co-authored a consensus document on how to reduce the time to diagnosis for Duchenne in 2019. One of the challenges of diagnosing Duchenne is some have cognitive & behavior problems, & the focus may be on these issues rather than muscle weakness. Another challenge is that while Duchenne is acommon rare diseases, it is still rare & primary carers often are not familiar.

Newborn screening is being discussed & evaluated. The problem is using creatine kinase as a marker not all patients will be picked up (an estimated 6% would be missed) and that patients with other diseases would be picked up for whom no treatment or management is available as an alternative, @duchennepp @TNO_nieuws did a study in the Netherlands showing that based on milestone development, Duchenne could be identified earlier. But this relies on frequent systemic visits to health care services, which happens in the Netherlands, but not everywhere, so more work is to be done to raise awareness with primary healthcare providers to recognized Duchenne patients. To quote @FilippoBuccella 'It is never a good time to hear your son has Duchenne, but earlier means you can be better parents.' 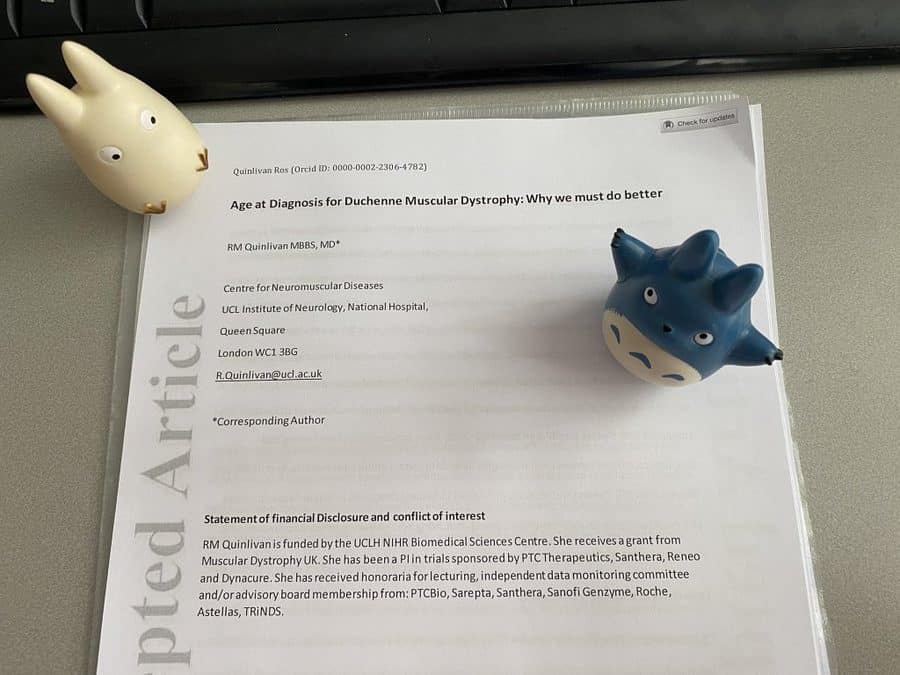 דף הבית » מאמרים » Age at Diagnosis for Duchenne Muscular Dystrophy: Why we must do better